my friends – i’ve made a thing.

the thing is called tidelines, and it’s my newest shawl pattern. i’ve been posting teasers about this babe for weeks so it’s about time i spill the beans and show the rest of it!

we launched it mega successfully yesterday at my trunk show at baaad anna’s, and now it’s ready to be released into the wild! much thanks to everyone who stopped by yesterday as well as paula for hosting me, and be sure to check out my co-star sweaterfreak aka jenny failfel and her gorgeous patterns too!

tidelines is an asymmetrical garter shawl made in two colours of YOTH little brother. for the sample i used colourways mango and banana, and don’t they just look divinely vibrant here against the foggy north van sky? 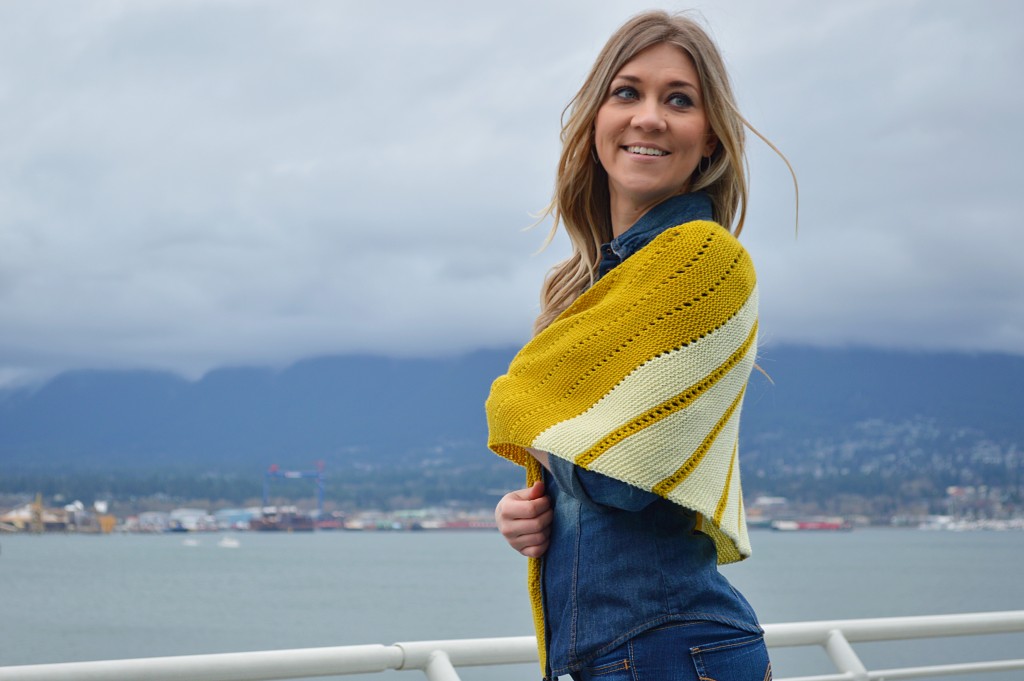 the MCN content makes this fingering-weight shawl irresistibly squishy and such a joy to knit – i cranked this puppy out in a few nights of rabid-speed-monkey-on-acid knitting but the next one i’m definitely going to take it slow and savour all the loveliness of it.

to make yours you’ll need around 420 yards of the main colour and 250 yards of the contrast colour. the gently curved shaping is done with continuous short rows, and some strategically placed eyelet rows are there for some extra flair and interest. 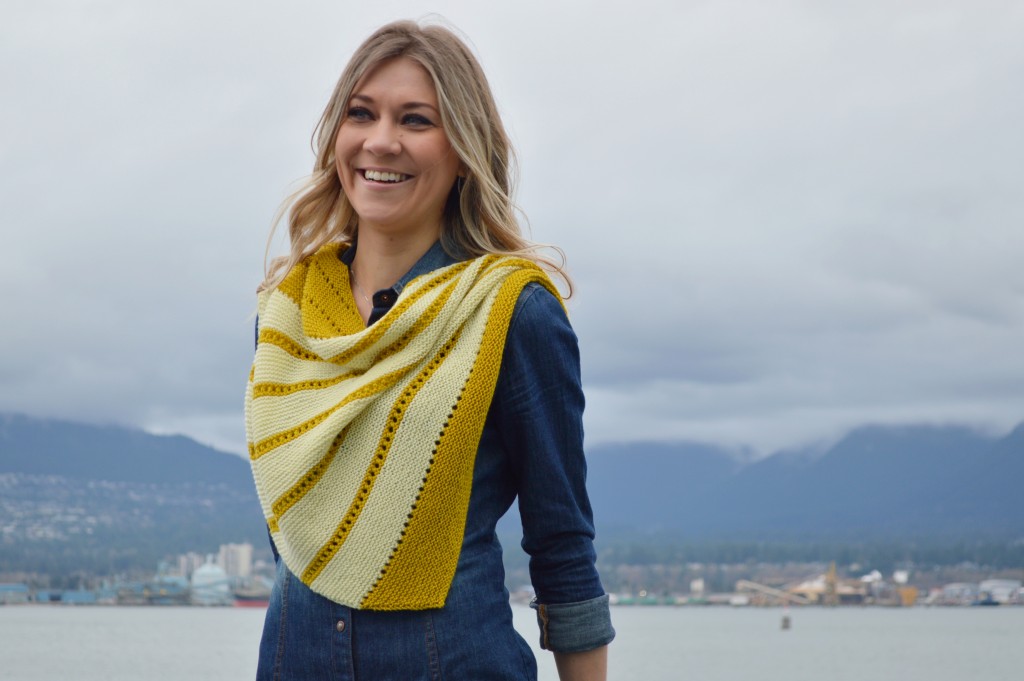 the sample is on display at baaad anna’s where you can also pick up a paper copy of the pattern. if you prefer a PDF download you can head on over to ravelry and get yours for a very reasonable price of $7!

all the kudos to my test knitters, ally, rebecca and melissa for jumping in headfirst to help with yet another evil scheme of mine, my tech editor tana for fixing all the mistakes i made because carrying out evil schemes is actually pretty hard, and my gorgeous model and friend katerina for agreeing to an early march outside shoot wearing nothing while i was wearing everything and heroically ignoring the mildly inappropriate passersby at canada place. i would not be able to do what i do without you guys! high fives and butt bumps all around!

i already have some new patterns brewing in my sleep-deprived head so stay tuned for more teasers soon! right after i spend today watching nothing but spongebob and wearing everything except pants.

amidst perhaps the busiest two weeks of the past few years i come before you with more exciting news!

the lovely folks at baaad anna’s have inexplicably decided to host me for a trunk show this week!

i’ll be joining the talented jenny faifel of sweaterfreak knits as the stars of this month’s event in the popular focus on local series. we’ll both bring loads of patterns and samples for you guys to ogle and i’m also teaching a brand new class on how to plan for a successful knitting project the same afternoon.

be sure to join us saturday, march 12 from 6-8 pm! the $5 entry covers all the fun plus refreshments! i cannot emphasize enough how many fun times are there to be had!

i’ll leave you with this secretive teaser of my newest shawl pattern, modelled here by my divinely beautiful friend kat, which will be officially released at the show! be there or be a sad loser person with terrible judgment! 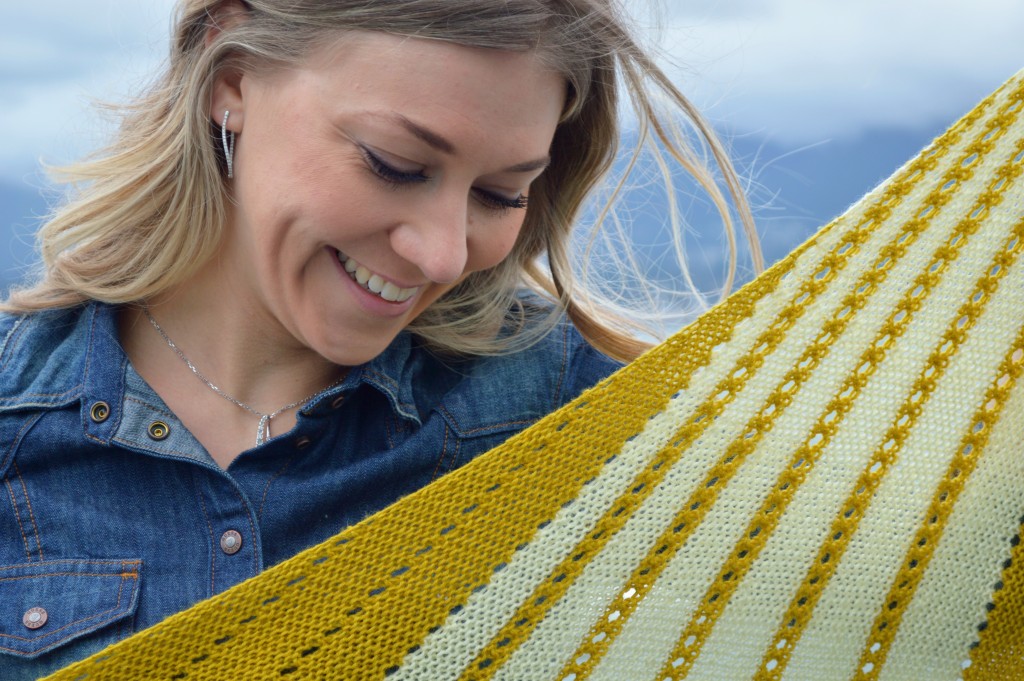 it’s been a few months since my channa sweater came out, and i finally got the chance to make one for myself. oh, the life of a designer – you spend so much time making samples that simply vanish out the door the second you cast off that by the time you do get to treat yourself you just don’t want to anymore because you’ve already made the same pattern eight fucking times.

except with this pattern. with this pattern I COULD NOT WAIT to make my own. i had a crystal clear vision for it that i compulsively had to realize and so as soon as christmas break rolled along i just sat down and made it in like a week.

it’s perhaps because when i was originally designing channa i was really designing for myself. i was purely creating something that would tick all the boxes for me, just me, and fuck everyone else, and the fact that everyone else turned out to have essentially the exact the same boxes was sort of… well, incidental.

as i’ve so often said i’m a huge fan of rustic and earthy yarns so it will come as a surprise to exactly no one that my own channa was to be made in brooklyn tweed loft, the beautiful, tweedy lovechild of the ethereal man-unicorn that is jared flood and a wyomingite sheep called petunia (i assume).

wait.. did i take that too far?

everything about the marriage of the design and this yarn is so perfect that frankly i’m astonished i came up with this idea in the first place. the fit is phenomenal, the colour looks fucking spectacular on me, it feels right, it drapes right.

and yet, all i really want to know is… what would jared flood say? would he approve? would he place is accepting hand on my head and gently say, “that’ll do, pig”? 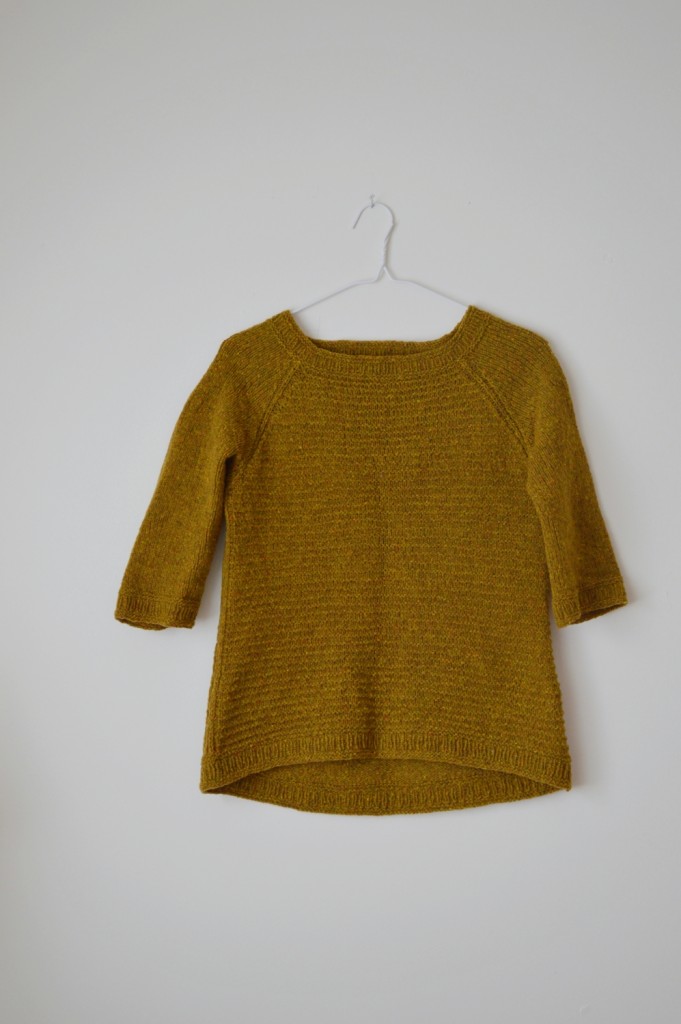 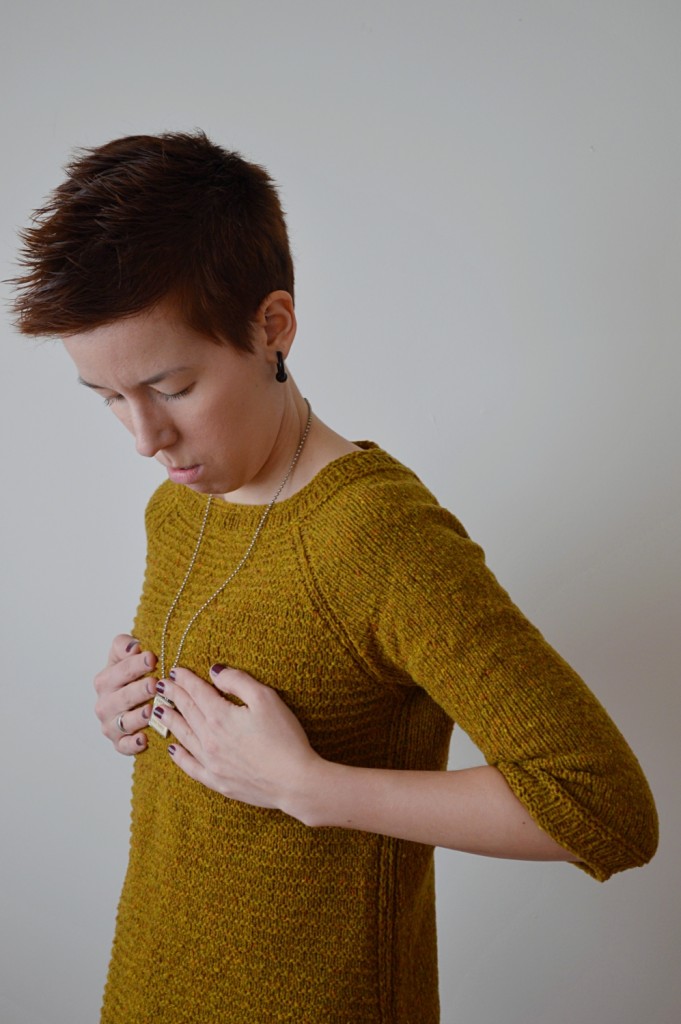 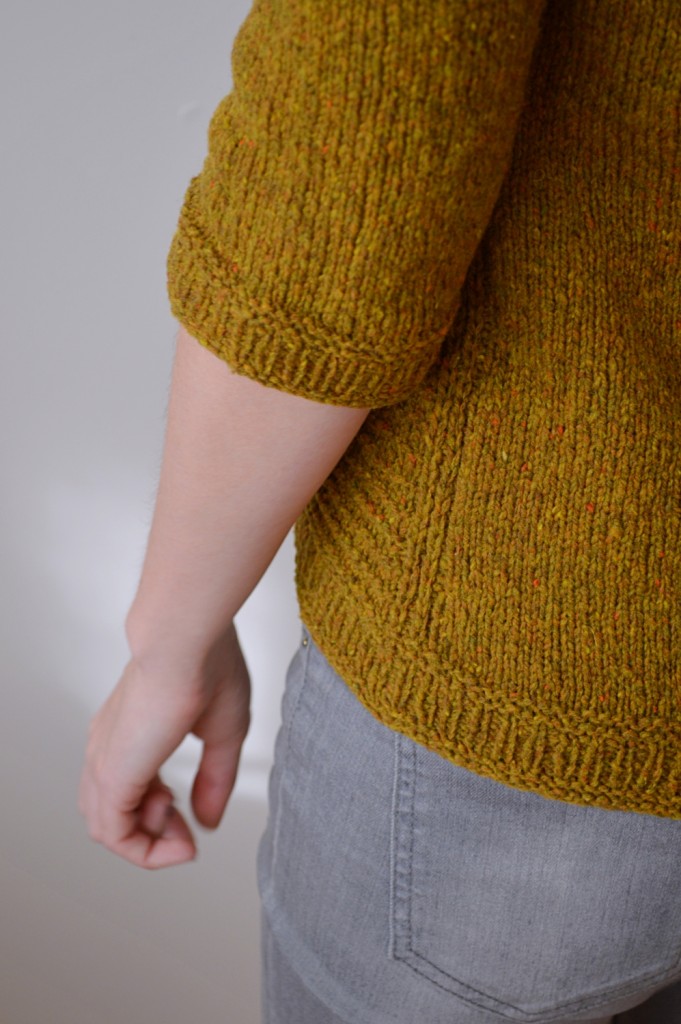 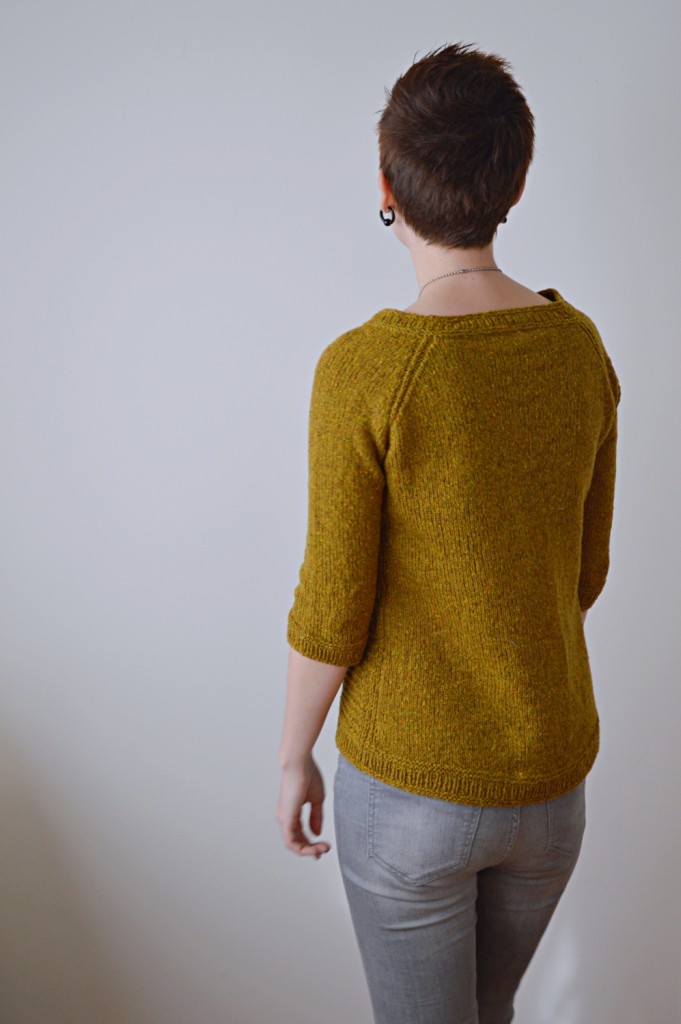 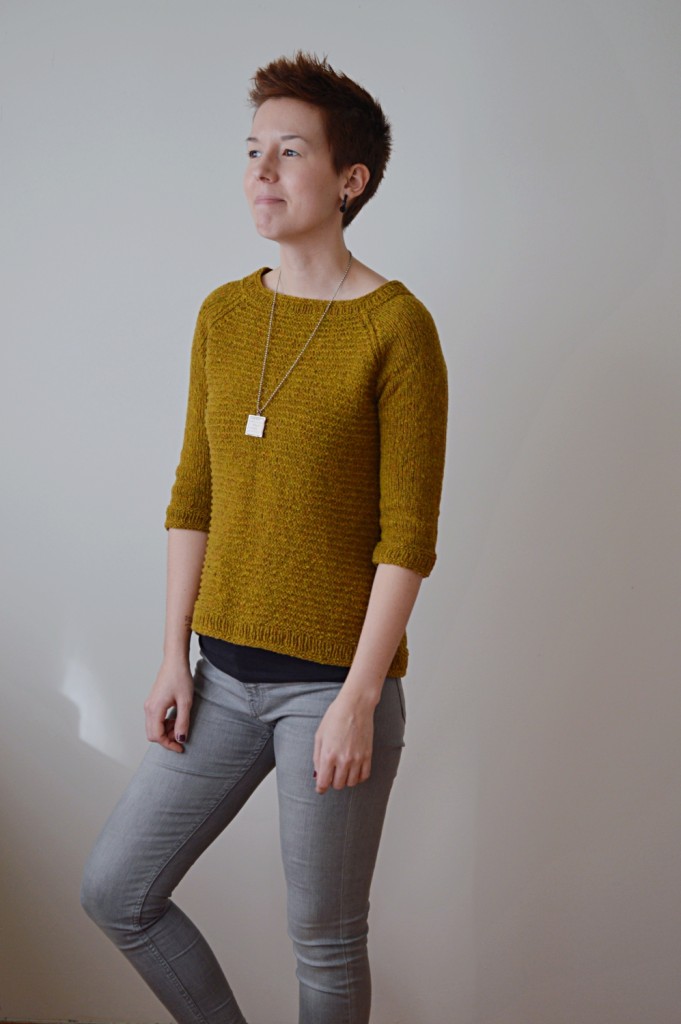 surprise folks! i gone and made a new pattern!

this simple little thing is called stacks, and it’s presented here by ashley, the ever-gracious evil twin sister of mine. look how her face is just pure evil! see? SEE? 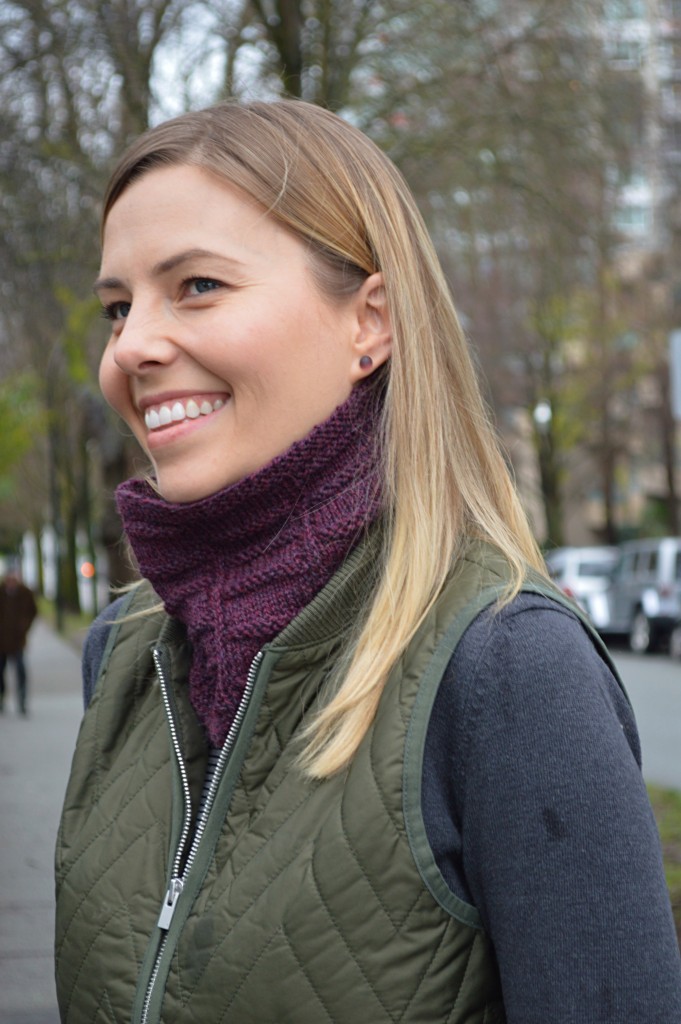 some kidding aside, i do love her dearly. she makes my things look good. and doesn’t complain when birds poop on her during these shoots. that’s what i call a win-win. for me.

the cowl comes in two sizes and the smaller one only eats up 50 grams of DK weight yarn, so you can make it in like 20 minutes (especially if you’ve happened to take my speed knitting class, and if not, why the fook not?). nothing too hard going on there, just knit and purl stitches with some slipped stitches in between, but put together they make for some pretty cool texture!

the sample was made in diamond luxury highlander, which is quite the surprising new favorite of mine! everyone knows i’m the worst yarn snob out there, but this affordable gem is pretty rad! it’s rustic, tweedy and non-superwash, so that’s basically three out of three for me. the sample’s out on display at wet coast wools here in vancouver and they also have the full highlander colour palette available. 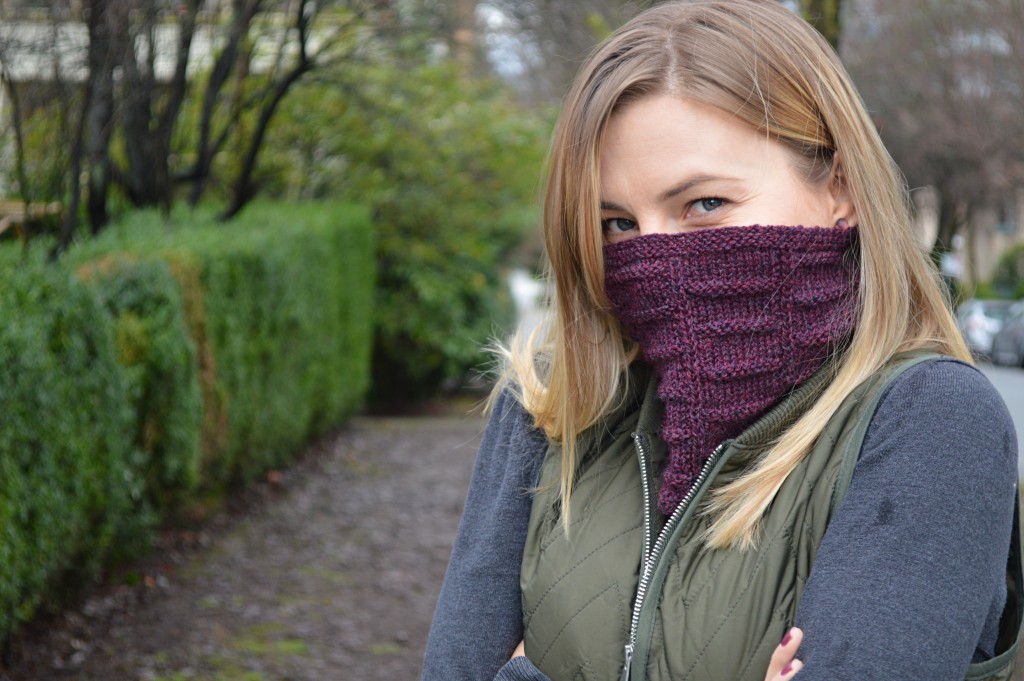 stacks is up for sale on ravelry as of right now, for a very reasonable price of 7 CAD (roughly 10 cents in any other currency, so you’re welcome). or you can support your local yarn store by buying it through the ravelry in-store pattern sales program, which will earn you some extra kudos and potentially one very shiny spongebob sticker the next time i see you!

now go forth and get yours while they’re hot! 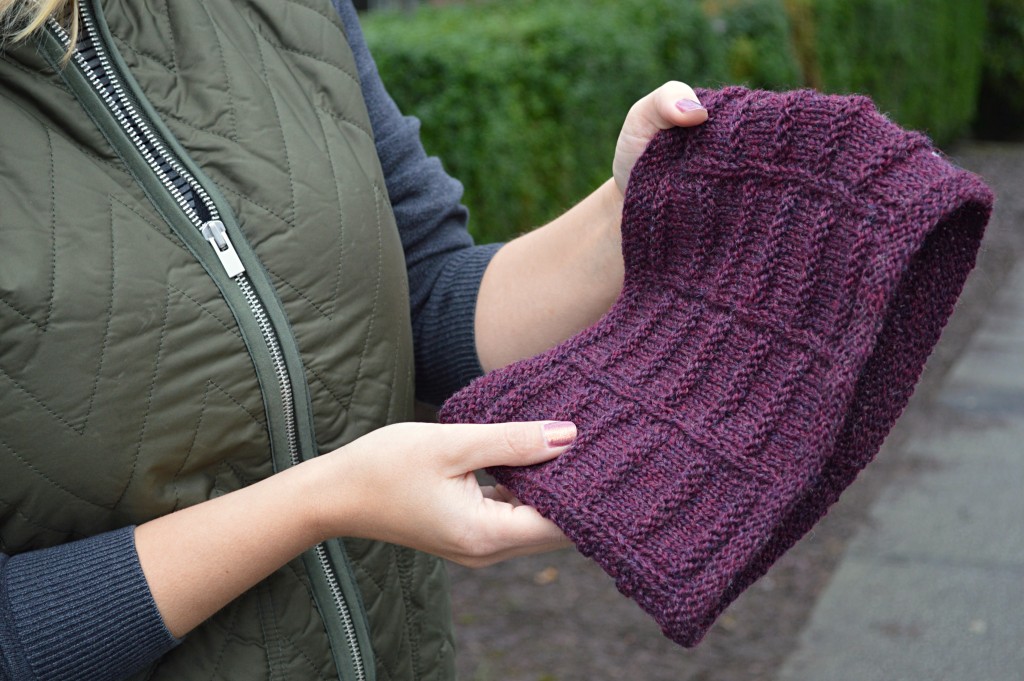 when i’m sick i hug yarn. and watch independence day. sometimes both at the same time. it just makes sense.

so after manhattan got destroyed but before jeff came up with a way to save the planet by giving the aliens a cold (THAT’S WHY IT’S SO FITTING) i hugged some serious yarn and decided to do a bit of a stash toss at the same time.

i don’t think i’ve ever laid down all my yarn for a single frame. initially i felt a bit mixed about seeing it all in one go. i thought it would look more impressive, by which i mean i thought i had more, like the greedy, delusional child i am.

then i remembered how extrodinarily good i’ve been about buying yarn in the past year or so. i’ve seriously only bought yarn for projects i’ve started right away. i haven’t stashed for the sake of stashing. that type of behaviour is exclusive to buying fabric now.

my camera hates complex colour combinations, but you’ll get the general gist of it – reds, yellows, teals and neutrals are spectacularly overrepresented in my stash. especially when on the earthy side of the spectrum they’re colours that always work for me, so they’re very safe in terms of buying into the stash. i’m also super drawn to rustic and sheepy materials, so while around half of my stash is merino because it’s so prevalent and easy to use, the other half is a pretty diverse collection of breed-specific yarns (bfl, columbia, finnsheep, targhee, i’m just name-dropping here because i CAN.)

you won’t find any multi-coloured skeins in my stash, because even though i used to dye variegated yarns for a living, i just don’t see much point to them. the only exceptions are self-striping yarns and skeins my mom picked (bless her underdeveloped eye for colour).

my stash of sweater quantities has dwindled enormously from its heyday because 2015 was definitely a year of sweaters and i made most of them directly from the stash. i also sold quite a few lots that i just didn’t love anymore, which is somewhat heartbreaking but also very grown-up and liberating.

back in the day i used to mainly buy single skeins, either because i saw a colour i couldn’t let go or because i wanted to try out a new brand or base. either way, that’s what the vast majority of my stash is still made of. for a long time i was (subconsciously) alternating between binge-knitting socks and binge-knitting single-skein scarves, which admittedly justifies an extensive fingering-weight single-skein stash, but eventually my knitting habits became more diverse and it started making less and less sense to just hoard them in hysteric amounts. (SEE? GROWN UP.) 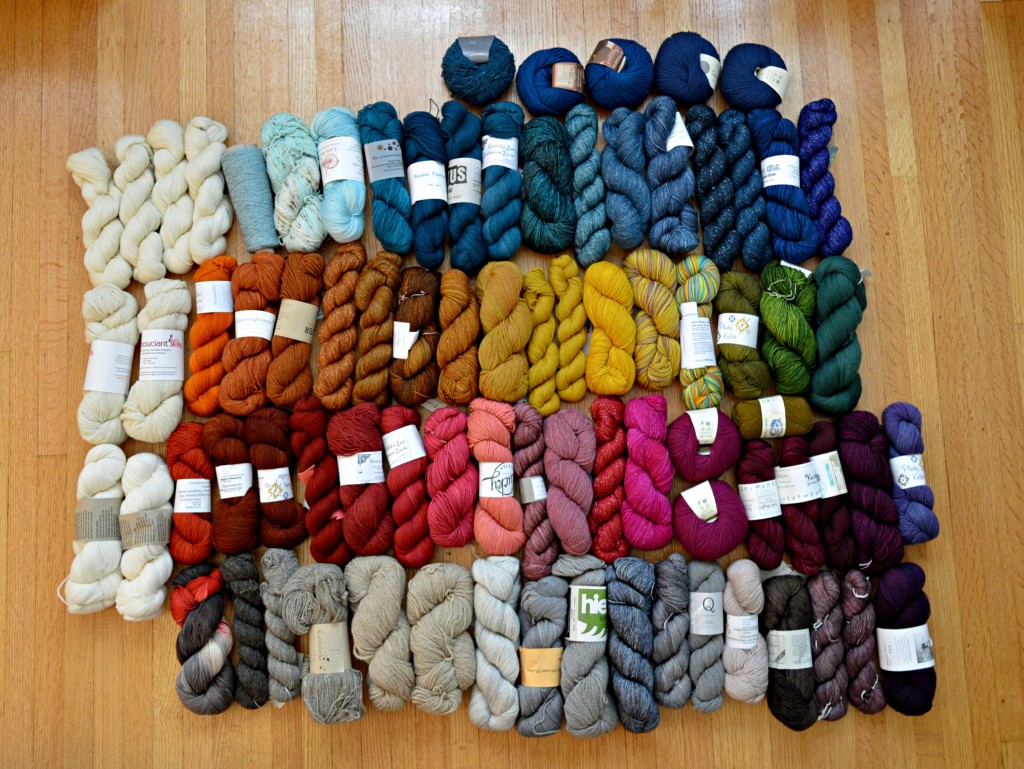 most of this stuff is therefore pretty old, from pre-canada times even. but not being much of a single-skein knitter doesn’t mean i’m just going to get rid of them. OH NO. there are babies here that carry a lot of memories, other babies you can’t even buy anymore, and babies that are simply too perfect for this world and shall therefore never be made into anything but cherished until the end of time for the perfect little bundles of joy they are. and around half of the single skeins are treasures from finnish indie dyers, which i do still allow myself to hoard whenever i go back, because home and nostalgia and shipping charges.

so it’s a pretty decent stash with enough to keep me going on a rainy day but not too massive to be stuffed into bags and bins and out of the way. and the toss revealed no bugs either, unlike my kitchen rampage a few days ago, which revealed plenty. but as long as they stay out the yarn we’re cool. and as long as they don’t pee in my cereal. and as long as they’re not spiders. on second thought, GET THE FUCK OUT OF MY KITCHEN, BUGS. 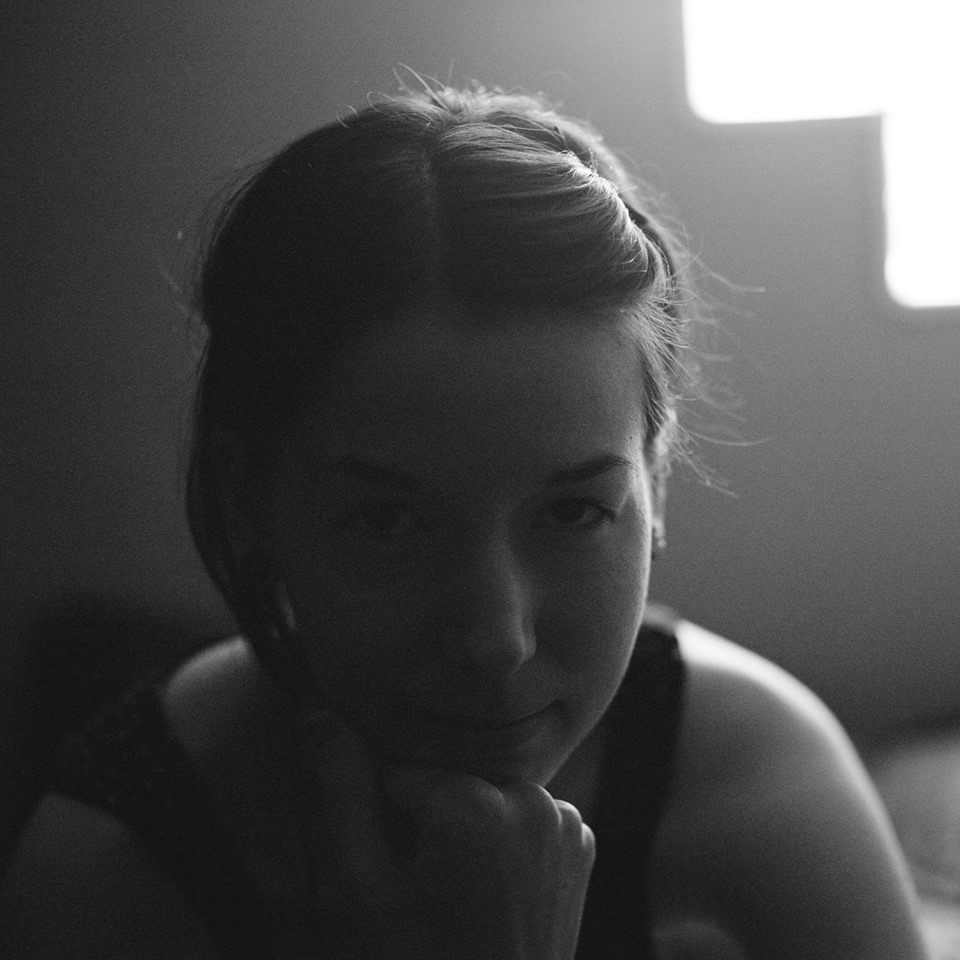 i am the bringer of sheep, wisdom and foul language.

Instagram
Please check your feed, the data was entered incorrectly. 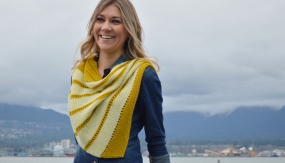 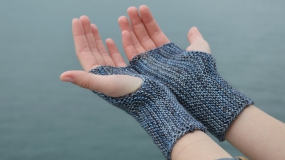 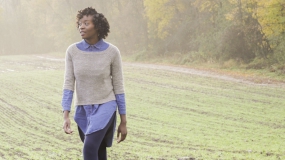 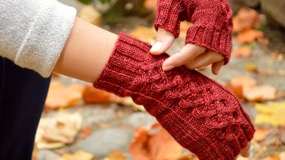 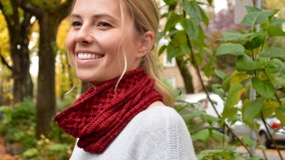 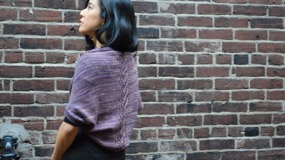